Two Brews for Oktoberfest and Halloween

On a recent visit to the Reston Total Wine store, I asked for some recommendations for pumpkin spiced brews. 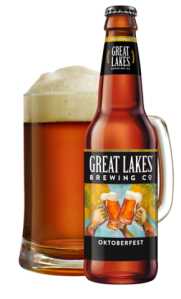 There were lots of those…and I like pumpkin ale. But he steered me to two “Marzen” beers, instead. Marzen beers are called “March” beers because that is when they were brewed in the days before refrigeration. Then they are released for Oktoberfest. They are typically only available during the fall.

The salesperson recommended Great Lakes “Oktoberfest” ($10/6 pack), a highly rated, award-winning Marzen-stlye lager from Ohio. The color of an autumn leaf, this malty beer is smooth, light and toasty, with caramel and pine notes.

He also recommended a beer from nearby Ashburn, Virginia that would go great with bratwurst and pretzels. Lost Rhino Brewing Company’s autumn seasonal “Rhin o’Fest” ($11.99/6 pack/cans) is the traditional, malty, smooth Marzen lager drunk during Oktoberfest. Washington Post named it a beer of the week back in 2016.

I’ll go back and try these… but I went home with The DogFather ($8.99), an ebony, bourbon barrel aged stout from Idaho Laughing Dog brewery. I’ve never tasted an American stout before and it came highly recommended. First time for everything!

The folks at Total Wine are great. Go by and see them if you are looking for something different to try.

Mary Fletcher Jones is a mom, teacher, and blogger. Her blogs include Autumn in Virginia, Cool Yule Blog and You Can't Make This Stuff Up, among others. She is also the creator of "Living Well With Autism," an online resource for caregivers of children, teens, and adults with autism and related special needs.
View all posts by Mary Fletcher Jones →
This entry was posted in Tempting Treats and tagged Great Lakes Oktoberfest, Laughing Dog The DogFather, Lost Rhino Rhin'o'Fest, Total Wine. Bookmark the permalink.